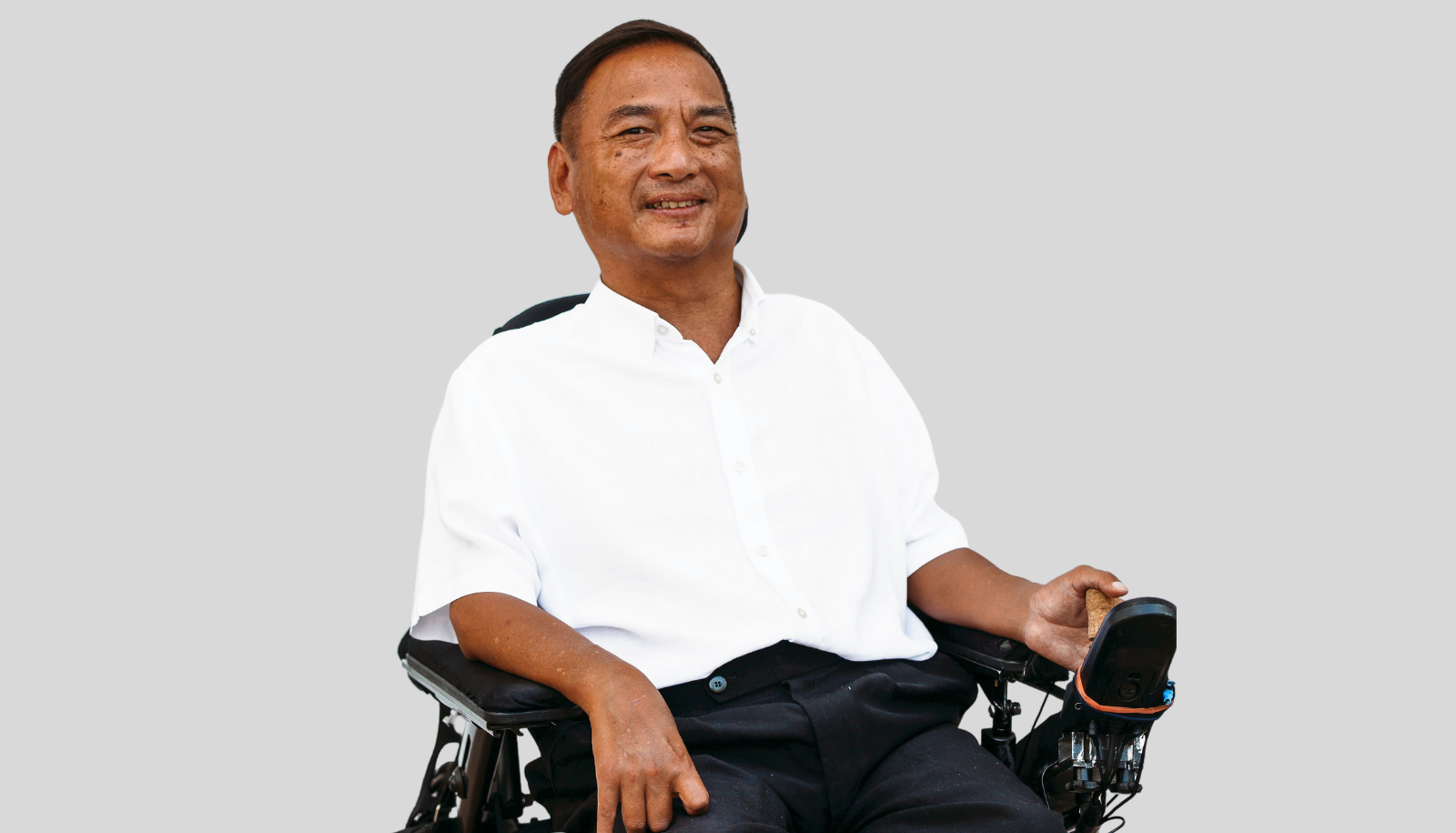 Image: Jude Lee sitting in a wheelchair and smiling at the camera.

In the face of widespread discrimination and extreme physical challenges, Jude Lee has always seen life’s possibilities. He has been able to sustain a successful legal career, thanks to support from JobAccess.

Jude Lee – once a litigation lawyer in the big end of town pursuing the likes of giant corporate raiders and defending large multinationals– has always had a vision of what was possible for him.

Diagnosed with degenerative spinal muscular atrophy at the age of six, he has never really been able to walk or lift his hands over his head. As his muscles weakened, the crutches gave way to a permanent wheelchair.

Now aged 58, the only movement which remains is slight movement in his fingers.

It hasn’t stopped him having a stellar legal career, marrying, having a son, driving – and dreaming.

But life could have been very different for Jude.

Despite happily attending mainstream primary and secondary schools in Melbourne’s Eastern suburbs, someone suggested that because of his disability he should be educated alongside others with disability. He was enrolled in a disability facility in a completely non-academic program.

“They were the worst two years of my life,” says Jude, who runs his own legal practice in Darwin, reputedly one of the Top End’s most successful.

But his determination, resilience, independent spirit – and outstanding support from his rehabilitation team and JobAccess – led him down a far more successful and inspiring path.

“If not, I would have quite easily ended up living in a home and working in what used to be called a sheltered workshop. But because of support from organisations like JobAccess I have been able to live a full and satisfying life.”

Not everyone could see his abilities

But it hasn’t been easy for Jude, who has a double degree in Science and Law and was once the Regional Director for the Australian Government Solicitors. He has faced widespread discrimination.

“It’s pretty much at all levels – from the person in the street to corporate situations where people undermine you. Unfortunately, people judge you,” said Jude, who left his highflying corporate lawyers’ gig back in the 1990s after getting the impression he and his wheelchair didn’t suit their image.

Workplace modifications have saved his career

Jude first reached out to JobAccess – the Australian Government’s hub for disability employment information – in 2007 for support with funding workplace adjustments.

Since then, JobAccess has supported him with a wide range of adjustments, including ensuring his office has automatic doors to accommodate his wheelchair, and significant ongoing modifications to his car.

“I am probably the weakest person you would ever meet who can drive. I literally now can only move my fingers. So, the modifications are a significant help.”

As Jude has lost the ability to type, JobAccess has provided support for Jude to dictate his legal work.

There is a wide range of support available from JobAccess for people with disability, employers, and service providers.

JobAccess has managed over 58,000 applications for funding workplace adjustments since 2006. Each one makes a difference by helping people with disability get work, keep work, and progress their careers.

Contact JobAccess on 1800 464 800 to speak to our friendly and resourceful Advisers about workplace adjustments and the Employment Assistance Fund. You can also submit an online enquiry through the JobAccess website.