Do you need to transfer to a new Disability Employment Services provider?  Find out more

Capitalising on a diverse workforce 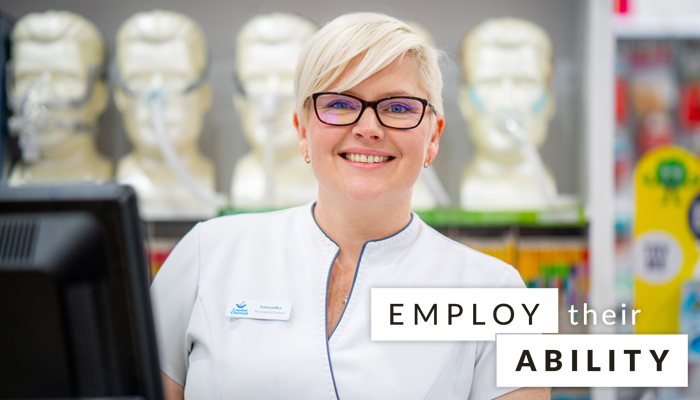 When Samantha Kourtis first met Jack he was 16. Jack’s parents were asking Samantha if he could do work experience at Capital Chemist Charnwood in Canberra, where she has been the owner for five and a half years.

Jack has autism and is nonverbal. When his parents asked Samantha if he could do work experience, his school thought he wouldn’t be capable.

But, Samantha decided to give him a chance. And it worked.

“A big part of our success was the partnership I had with Jack’s mum, Margaret. She never made me feel bad about any of the questions I asked, and taught me about Jack - and autism in general - without making me feel ignorant,” she says.

Samantha’s experience is not uncommon. In fact, 37% of employers describe hiring people with disability as ‘a step into the unknown’. For employers feeling this way, the Disability employment basics section of the Employer Toolkit is a great way to get started building confidence.

Capital Chemist Canberra is a hugely successful business, servicing a large portion of the ACT and having around 500 people through the door each day. For Samantha and the team, working with Jack has made the busyness that much easier to deal with.

“He brings so much joy with him each day. He is overflowing with enthusiasm just from being here - I can tell he’s so grateful just to be given the opportunity,” says Samantha.

They’re not alone, either. According to the Suncorp Inclusion@Work Index, employees in inclusive teams are 19 times more likely to be very satisfied with their job than workers in non-inclusive teams.

Samantha says that having Jack on the team meant that she thought more about how she assigns tasks - not only to Jack, but to everyone.

“It was a fascinating learning curve in regards to how I train staff. When you have someone who you have to explain what a barcode is, it makes you think about how you can break things down for everyone,” she says.

“It’s meant that I’ve put more time into finding out what people’s strengths and weaknesses are, and thinking about which tasks are suited to which people.”

For instance, Jack likes computers and is very meticulous. So, Samantha taught him how to use the dispensary robot - a ‘vending machine’ that dispenses 800 different drugs, and is used to fill the 600 prescriptions that come through each day.

And it’s safe to say he loves it. Jack, who came to Capital Chemist nonverbal, one day came to Samantha and said: “I pack the robot”.

Employers who want to reap the benefits of hiring people with disability aren’t in it alone. JobAccess has a range of services available to help, and the Employer Toolkit can take you through every step of the process.