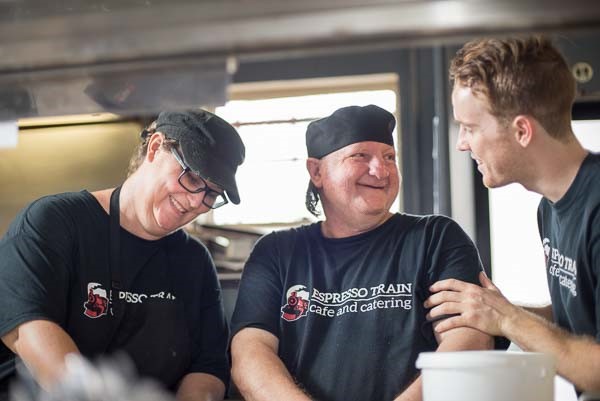 Nundah Community Enterprise Cooperative (Nundah Cooperative) has been a successful social enterprise for more than 20 years and was named Australia’s best social enterprise in 2015. It is a great example of how people of varying abilities are working together to create opportunities for meaningful work and sustainable business.

Nundah Cooperative was started by a group of people with intellectual and psychosocial disabilities in response to long-term unemployment.

According to Nundah’s Cooperative Coordinator, Richard Warner, their success stems from its foundations in community development and its member-owned structure.

‘The special thing about this organisation is that it’s member-owned. It’s a model that empowers employees by not just giving them a job, but a stake in the organisation that employs them.’

‘People have a meaningful role, a say in decision-making and share in the ownership of wealth that’s generated. They move from being the receiver of services to a contributor to society.’

While Nundah Cooperative offers a similar supported environment to an Australian Disability Enterprise (ADE), it is only partially government funded.

‘At that time there were barriers to becoming an ADE, so the founding group and community supporters looked at different models of structuring the organisation and offering employment for people’.

Nundah Cooperative has now grown to a size where the organisation generates around 80 per cent of its revenue from business activities.

‘We’ve never had the security of knowing what our annual funding would be, so it’s been essential for us to create our business opportunities around our members and employees, without over-reliance on external funding.

‘We’ve needed to be ahead of the game in working out ways to be viable and sustainable.’

Richard says that like any business, it was the larger partnerships or contracts Nundah Cooperative was able to secure that helped them to grow.

‘What really allowed for taking the next step in our growth was securing one of the first social procurement opportunities with local government for a park maintenance contract.’

‘We also focused on diversifying the types of jobs our cooperative members could access, so we could better ensure the work was the right fit for our teams.’

When Nundah Cooperative went into the catering business and opened local social enterprise cafes, they were able to leverage the support of community organisations and philanthropists.

‘Our social enterprise cafe is now one of the longest running in Australia.’

‘By showing we have a sustainable business model, we were able to gain the support of a range of organisations to help set up the cafe and catering business. This included funding from the Department of Social Services to help with set up costs.’

‘Our social enterprise cafe is now one of the longest running in Australia. We’ve had great success in sustaining our endeavours, but also know that we need to keep ahead of the game, especially as the National Disability Insurance Scheme (NDIS) NDIS comes into place.’

‘We’re facing some uncertainties as people transition to the NDIS. Our model is different to more traditional disability employment enterprises. We’re reliant on a healthy eco-system of NGO partners, so we’re not sure of the full impact until we’re there.’

But for Nundah Cooperative, the hope is the NDIS may bring future opportunities.

‘As a social enterprise, where a large proportion of our funding is generated by income, we can offer sustainable job opportunities as well as a pathway for people who want to have a deeper role and responsibility in the organisation they work for and in their community.’

‘Our vision is to spread this type of model and support to other like-minded social enterprises to be sustainable, so people living with disadvantage truly have more choice and opportunity in the enterprises they work in.’