The sound of success: supporting Alistair’s career as an international voice artist 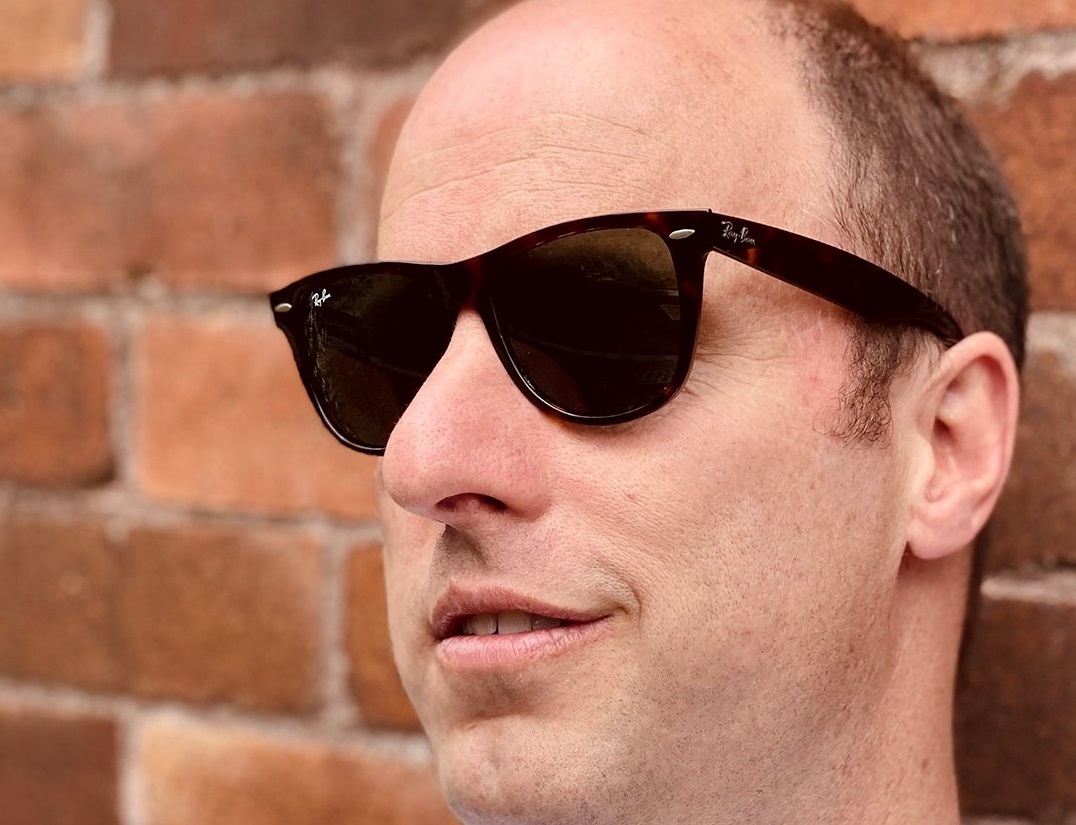 Listening to Alistair Lee’s dynamic vocal range, you can understand why he’s in demand in the voice acting industry. With the support of JobAccess, he’s been able to make a critical piece of studio software accessible to his needs, allowing him to expand his international career.

As a voice actor, Alistair has taken his voice around the world, performing voice overs, and bringing scripts to life in commercial advertising for a range of multinational companies. If you watch television or listen to the radio, you’ve probably heard Alistair’s voice work.

“I love being a voice actor, it’s something that gives me enormous joy and you can obviously earn a living out of it as well,” the Sydneysider says.

His clients say his ‘acute ear’ allows him to pick up on subtle nuances of speech and accents and deliver exactly what they want, efficiently and professionally. Many praise the quality of his voice as well as his timing and delivery — all crucial to sounding natural and at ease with the concepts and messages in scripts.

As a child, Alistair grew up listening to ‘thousands and thousands of audio books’, as well as actors in the theatre and films, and this love of listening to people reading and talking is where his appreciation of the spoken word came from. Listening was a big part of Alistair’s early life and beyond because he was born prematurely, which led to blindness and other health conditions.

Alistair was born at around 26 weeks’ gestation, remaining in hospital in a humidicrib or incubator for five months afterward. In tiny babies, oxygen therapy can cause blindness, and in Alistair this was unfortunately permanent. He was also born with mild cerebral palsy.

As he’s gotten older — he’s now 41 — the cerebral palsy has led to stiff muscles that require regular physiotherapy. He also lives with ‘a spine that’s a bit dodgy’, chronic pain, arthritis and deteriorating motor skills (particularly in his hands), and he’s been diagnosed with attention deficit disorder.

“Blindness is probably the most recognised one in terms of making things more challenging. But there are ways around all these things,” Alistair explains.

Indeed, none of these health conditions have impacted his ability to do the things that sighted people take for granted, such as complete school, go to university, travel, achieve sporting success, work in a range of interesting jobs, get married and recently become a very happy dad.

No barrier to a rewarding life

In his youth, Alistair went to NASA in the US to train to be an astronaut for a week as part of a school exchange program with a blind school.

“Being able to look around (rocket) Saturn V, these guys had Braille labelled everything. The amount of effort they would have gone to do all of that is extraordinary. And we got to go in the NASA dive tank as blind people to see how astronauts operated. It was an unbelievable experience,” he says.

In his teens he represented Australia in swimming and athletics, competing at the Pan Pacific Games and racking up many Australian records – primarily in swimming – some of which still stand today.

Alistair has a degree in music and is also a keen mechanic, having always enjoyed pulling engines and cars apart, and restoring a few of his own. He can identify the make or model of a car by sound because he has absolute or perfect pitch, which is the rare ability of a person to identify any musical note by name after hearing it.

“For me, engines or mechanical sounds are musical instruments because I can hear all the notes and different pitches and noises they make. It’s like having a picture, in a sense. For a sighted person you’ve got a picture that you could look at and describe a scene or situation. For me, sound is exactly like that,” he explains.

Alistair was particularly successful in the IT sector, having worked his way up from being a receptionist for a start-up to ending up running all its information technology as its IT Director when it became a national company of 200 people.

“That was an enormous privilege because employment rates among blind people are so very, very low. I was fortunate to be able to have that opportunity to learn how the mainstream workforce works. It was a wonderful journey to go on,” he says.

But it’s his work as a voice actor that’s given Alistair the most joy, and where the support of JobAccess has helped to improve accessibility in a highly successful career.

Setting up his own recording studio

Having a love of the spoken word led Alistair early on to meet a few actors that guided him through how voice overs work, and this mentoring got him started in the industry.

By late 2019, Alistair knew he’d need to build his own recording studio to achieve his goals — helping people with recording things quickly, getting into the international market, and producing his own music in the long term.

With his exacting standards, the build took more than a year to complete, with lots of extra sound panels needed to achieve the acoustics that Alistair wanted. One aspect of the new studio that wasn’t accessible to the blind was the operation of a software program called Source-Connect, which makes remote recording sessions achievable from anywhere in the world.

With so many studios using Source-Connect as a standard piece of software, Alistair didn’t know how he would link up with them and continue his career as a voice actor if he wasn’t able to use it.

Having previously received support from JobAccess through its Employment Assistance Fund (EAF), Alistair was quick to make further application for funding of workplace modifications. Following a free workplace assessment to work out what modifications or equipment would be helpful, the Assessor approved funding for specialised IT scripting services to allow Alistair to use Source-Connect.

Assistive Technology Specialist Michael Williams, from Imagine Access, met with Alistair to understand his individual requirements and come up with a solution that would allow him to access his workplace software and achieve his best.

“Michael has written scripts which enable me now to be able to utilise that software. And it’s brilliant. Without that I’d be quite stuck because if you can’t link up with other studios, and other companies, or television or radio stations, then you’re stuck,” Alistair says.

“Getting all the software to be accessible again is where the assistance of JobAccess has been absolutely extraordinary, and in allowing me to engage the services of Imagine Access. Without Michael’s help, I don’t know where I would be.”

Earlier in his career to support his IT role, Alistair received JobAccess funding for a Braille embosser, which is a printer that turns text into Braille. For Alistair, this piece of equipment was ‘life changing’. It meant he could have a script emailed to him by his voice agent, transcribe it into Braille code using translation software, and then use the Braille embosser to produce a hard copy on special paper.

“It speeded up the translation time, particularly if you’re doing a long corporate read where it might be 10 or 30 print pages long, or if I’m doing a cartoon voice, some of them can be pages long. To be able to whack it in, adjust the formatting a bit, and press print, I don’t know where I’d be without my embosser. It’s so much faster than typing up scripts on a Perkins Brailler.”

Alistair recently received funding to upgrade his embosser so that he could use it remotely, and his JAWS screen reading software, which helps users read aloud what they’re unable to see on their screen through text-to-speech technology.

In the past, he’s also been granted funding for a Braille display, which provides access to information on a computer screen by electronically raising and lowering different combinations of pins in Braille cells. Alistair found the process of submitting applications to JobAccess straightforward.

“Sometimes you need a bit of sighted assistance depending on how good or fluent you are at using computers or software, but I found it very easy to do,” he says.

The difference to his work life and prospects

Without the support provided by JobAccess, Alistair wouldn’t be able to use Source-Connect, a lifeline to all his clients.

“Source Connect is that critical piece of software that allows my studio to be able to connect to any studio in the world that uses Source-Connect. Without that I’d be sunk. I wouldn’t be able to do a lot of the things that I can do now. I can work with a client in America, in England, or wherever it is in the world, with the highest quality audio for my client,” he says.

“I can’t underline enough how being able to access Source-Connect and have the embosser there for Braille transcription, allows me an ease of access to the greater world of voice overs and working to often very tight deadlines in as similar a fashion as a sighted voice over artist.

“Also, the support that JobAccess has provided is truly fantastic because they’ve always been positive to deal with. Everyone that I’ve spoken to, if I’ve ever had a question about an invoice or something to do with how I might fill this in, I have found everyone to be absolutely charming, very knowledgeable on any specific area that one needed to address.

“It’s been an absolute pleasure to deal with JobAccess and all the people that work there.”

Advice to other people considering making an application

Alistair’s advice to others is simply to go for it!

“If you don’t reach out and knock on the door no one will ever open it. I think a lot of people who are blind or visually impaired struggle in life, it can be very tough. What JobAccess does is it opens doors for opportunities, that can be expanded on or developed depending on which way the person wants to go,” he says.

“I think that it’s a wonderful, wonderful service and I think the way that it’s run is excellent. It gives you confidence to try and get out there in the big world, which is not always as easy for us to manage as it is for a sighted person.

JobAccess has managed over 57,000 applications for workplace adjustments since 2006. Each one makes a difference by helping people with disability get work, keep work and be more productive.

Contact JobAccess on 1800 464 800 to speak to our friendly and resourceful Advisers about workplace adjustments and the Employment Assistance Fund. You can also submit an online enquiry through the JobAccess website.