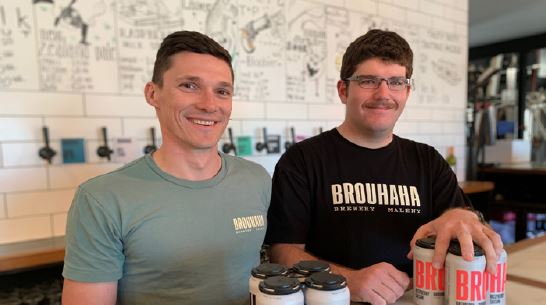 Owning a brewery is a dream come true for Matt Jancauskas.

But he still faces the same challenges as any other small business owner, when it comes to finding the right employees.

“Through a food networking group, we heard about options to employ people through a Disability Employment Services provider — and we decided it would be worth looking in to,” Matt said.

Within a few short weeks Matt’s business, Brouhaha Brewery on the Sunshine Coast, was introduced to 22-year-old Mitch Blood – who has turned out to be a perfect match for one of the brewery’s most important roles.

“As a brewery, one of the most critical positions in the business belongs to the person on the canning and packing line,” Matt said.

“We’re canning on a small scale, so we don’t have high level machinery – instead we rely on highly attentive humans. It’s one of the most important jobs we have when it comes to getting our product to market.

“We send our boutique beer all over Australia, so if there’s the slightest imperfection or smallest

defect on a can or pack of beer it can have massive repercussions for us.

“It could explode and be recalled … things can escalate pretty quick and cost a lot of money.”

For the brewery’s first three years in business, the canning line role was difficult to fill.

“Other people we’d put on the canning line had been consistently inconsistent,” Matt said.

“Mitch has Asperger’s and he is very careful about what he does — everything he does is done impeccably.

“His attention to detail is second to none and he works methodically and carefully. On the canning line it’s not about speed, it’s about consistency, and Mitch has delivered that to us in spades.”

Prior to starting work at the brewery, Mitch was working as a school cleaner, but found it wasn’t a good fit.

“I had to work so quickly to tick off everything that had to be done and often that meant I couldn’t do the job properly,” Mitch explained.

“Here at Brouhaha I’m rewarded for taking things at the correct pace to make sure I can do my job really well. That doesn’t mean I’m allowed to be slow though – we always aim to get as many cans safely and correctly on to the conveyor belt as possible in a day.

“My favourite thing about this job though is that I can be myself, and my best efforts are recognised. It makes me feel pretty good and I like working with a small team because it’s made getting to know and trust everyone heaps easier.”

Not only has Mitch filled a role Matt desperately needed done well — he’s also brought out the best in his fellow staff members.

“They’ve taken on extra responsibilities to help Mitch succeed, and that’s not something I’ve asked them to do,” Matt said.

“They’ve stepped up because they can see that Mitch is an asset to our whole team.

“Having Mitch working with us has made us all better people and better team members —which is a pretty cool thing, and that really helps foster a great working environment.”

Matt said he wishes he’d considered employing a person with a disability sooner.

“As a small business owner, I assumed it would be too difficult, to be honest,” Matt said.

“I don’t know why I had that perception. But for me, it felt like something that only larger companies would have the time to facilitate properly or afford to do.

“That couldn’t be further from the truth, because it’s actually really easy and I wish I’d looked in to when I first started the brewery.

“We’re well supported through our Disability Employment Services provider and we’re so grateful to them for connecting us to Mitch, and he’s happy to have a job he enjoys.

“Mitch clocks on and off like every other employee. He’s always here a little bit early, eager to start his shift and he doesn’t go home until he’s happy everything is in order.”

In just a few short months at the brewery, Matt said Mitch has become more confident.

“He actually came to the brewery for lunch with his family the other day and he was so proud to show them around and introduce his Mum to different staff members,” Matt said.

“He even bought a four-pack of beer to give to a friend as a gift who had helped fix his car.

“So he’s actively out there supporting our brand too! It’s a great story to be a part of.”

Help and financial support are available to small businesses to employ people with disability. Find out more at jobaccess.gov.au or phone 1800 464 800 to be put in contact with a service that can connect you with people who are ready to work.